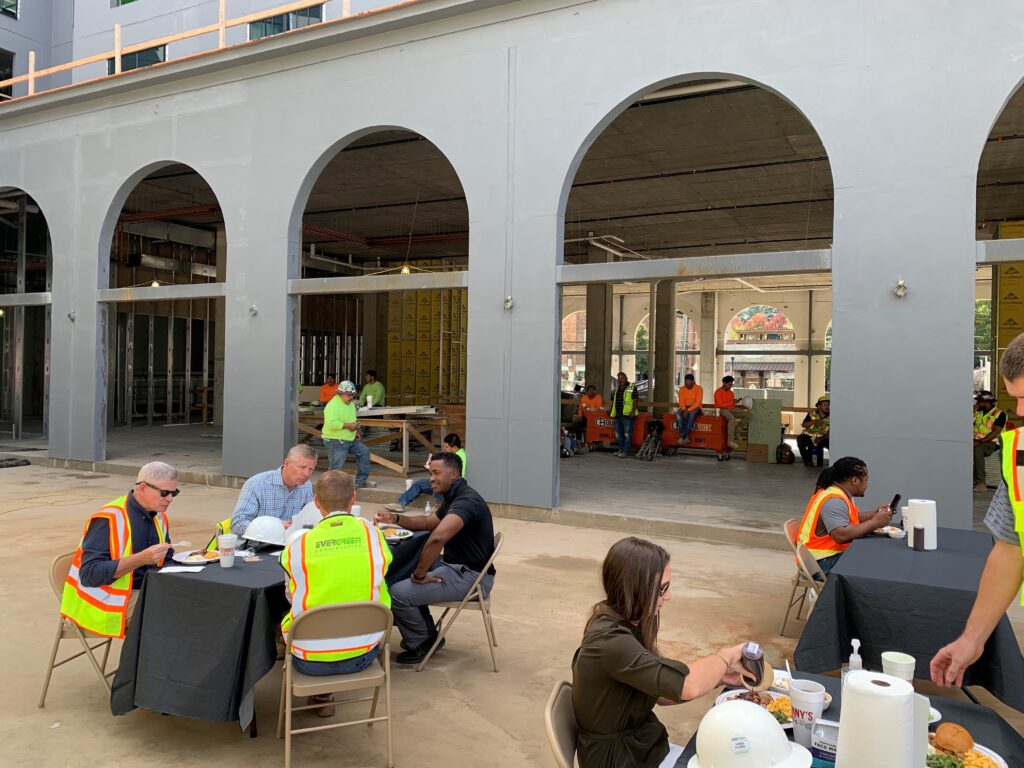 What is “topping out,” and why do we celebrate it?

Have you heard construction friends or colleagues excitedly share about a “topping out,” and wonder what they were talking about? The topping out ceremony is an age-old tradition in which the tallest and last beam is placed on a project. It marks a major milestone for everyone on the project. It signifies the groundwork being laid and the countless hours already poured into the building. It also commemorates the hard work that each person has contributed to reach this day.

Over the years, topping out parties have become commonplace. For Evergreen, that can mean anything from a communal meal to a special install. In fact, a few months ago at our Hendrick’s Middle School topping out party, the last beam was painted green and signed by the project team, architects and engineers and key school personnel.

Last week, we had our topping out for The Hamilton, a new boutique hotel coming to Alpharetta, Georgia. We set-up tables throughout the site and invited the entire job site crew, our project team, the hotel ownership team, the principal architect as well as the newly hired general manager of the hotel to enjoy lunch. Once complete the hotel will feature 119 luxury rooms, along with restaurant and bar space including a speakeasy-style bowling alley. All of the above stakeholders have been integral thus far and will continue to be so from here. That’s what makes a topping out so special; it’s a way for everyone involved to be shown gratitude for their contributions.

While the party is fun, the tradition is even better. According to our research, the concept of a topping out originated in Scandinavia. There, as a part of ancient religious beliefs, a tree was placed at the top of a new building to appease the tree-dwelling spirits displaced during construction. After all, years ago, besides clearing trees for construction, timber was one of the main construction materials. The tradition eventually spread throughout Europe and is now prevalent in construction throughout the world. While topping out looks different in every culture, the intention is the same: to celebrate how far we’ve come—a milestone worth toasting!